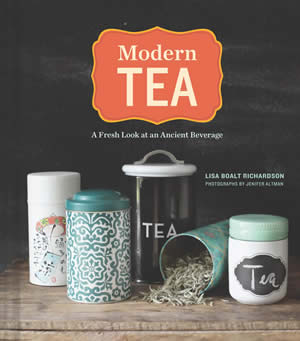 Over the past ten years some new and groundbreaking tea books have hit the market and become instant industry classics. “The Story of Tea: A Cultural History and Drinking Guide” by Mary Lou Heiss and Robert Heiss was released and took its place as a veritable textbook for tea enthusiasts. It was nominated for a James Beard Book Award and an IACP Cookbook Award and also won Best Tea Book in the USA from Gourmand Awards and a bronze for Best Tea Book in the World in 2008. The expanded version of “A Social History of Tea” by Jane Pettigrew and Bruce Richardson was considered a must-have before it even hit the shelves. Cynthia Gold’s “Culinary Tea” pushed other books aside on cookbook stands. The heavily researched “Tea: History, Terroirs, Varietals” by Kevin Gascoyne presented the science that many students of tea have longed for. I do not hesitate to say that Lisa Boalt Richardson’s newest book, “Modern Tea,” belongs in this impressive grouping.

Richardson is not new to tea writing, having won Best Tea Book USA in 2009 for “Tea with a Twist.” She is an educator and consultant and has been featured in publications including The New York Times, Real Simple and Tea Time Magazine. She has also previously published “The World in Your Teacup: Celebrating Tea and Traditions Near and Far.”

“Modern Tea” is not a particularly lengthy book, at 164 pages, but it is packed with engaging stories, beautiful images and valuable information. “Tea is a beverage,” it begins, “…a commodity, a ceremony, an afternoon tradition, a drink of peace, a pick-me-up, a path to meditation, and much more.” As I read through the text it occurred to me that it is the perfect book both for those who are already tea enthusiasts, but also those who have newly discovered their passion and want a comprehensive primer for their explorations.

Richardson offers a mix of well-researched history interspersed with personal stories that give warmth and color and make the world of tea feel close at hand. The tales will definitely inspire the armchair traveler in many readers. While the general topics covered in the book have been written about elsewhere, this book makes it seem brand new, with Richardson’s personality bursting off the page.

The book begins with thorough explanations of the tea types but the author keeps it fresh and new with her own memories and lessons learned from visits to tea plantations and growing regions. There are detailed sections on buying and storing tea, along with both eastern and western steeping style descriptions. The step-by-step nature of these pages provide actionable items for readers and made me think again about some of my own practices. The lovely descriptions of various tea ceremonies including Chinese, Japanese, Taiwanese, English and Moroccan, not only bring us into those worlds, but also give us the knowledge we need to recreate versions of those ceremonies at home.

Richardson never hesitates to delve into the science of tea, looking at olfactory experiences from this vantage point, along with data around antioxidants and caffeine. Staying close to her roots she also shares her thoughts on pairing tea with other foods, cooking with tea and tea cocktails, as well as ways to use tea in body care products.

I do feel the need to disclose that through my years in the American tea world, Richardson has become a friend. But she has also been a valuable teacher as I pursued my Level 1 and 2 certifications with the Specialty Tea Institute. Her knowledge was thorough and she is an approachable and enthusiastic educator. I am delighted to say that these qualities come through clearly on the page. I strongly recommend that you give “Modern Tea” a read and that you share it with others who are beginning their journey in tea.